The composition of the church demonstrates Hawksmoor's characteristic abruptness: the very plain rectangular box of the nave is surmounted at its west end by a broad tower of three stages topped by a steeple more gothic than classical. The magnificent Tuscan porch with its semi-circular pediment is bluntly attached to the west end: it was a late addition to the design intended to add further support to the tower.

Like those of Hawksmoor’s other London churches and many of Wren's, the central space of the nave is organised around two axes, the shorter originally emphasised by two entrances of which only that to the south remains. It has a richly decorated flat ceiling and is lit by a clerestory. The aisles are roofed with elliptical barrel-vaults carried on a raised Composite order (cf. Wren's St James, Piccadilly), and the same order is used for the screens across the east and west ends. The Venetian window at the east may show his ease with using Palladian motifs, or it may be a rhyme with the arched pediment of the entrance portico, repeated in the wide main stage of the tower.

‘During the next two centuries, only the most perceptive – such as Soane and Cockerell – really understood Hawksomoor’s architecture, and only in recent decades has he received the recognition and attention which was his due. Hawksmoor is now prominently placed in the Pantheon of British art, and our modern architects are happy to worship at this shrine. Perhaps it is the utterly uncompromising monumentality of his work, sometimes verging upon the brutal, which endears him to modern masters like Lasdun and Stirling; but it is also his thoughtful and harmonious originality within a vital tradition which establishes Hawksmoor among the truly great.'’ 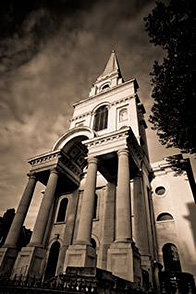