Christ Church was built under the Act of Parliament of 1711 which required the building of fifty new churches to serve the new populations on the fringes of London. The Act established a Commission that was to determine the brief for the new buildings; its members included Wren, Vanbrugh and Archer. Hawksmoor and Dickinson were appointed as Surveyors to carry out the programme.

In 1710 the roof of St Alfege, Greenwich had collapsed, and its parishioners petitioned the Commission to provide money for rebuilding the church; it became the first of the series that Hawksmoor designed. Of the intended fifty churches, when the programme expired in 1731 only twelve had been built, of which six were designed by Hawksmoor, including:

The Friends have published a concise leaflet about the six churches: for information and to purchase click here.

‘No one understood better than Hawksmoor the dynamic deployment of architectural form or the dramatic possibilities of light and shade. The complex forms of the London churches, whether in internal planning or in external embellishment, are as eloquent as anything by Borromini, the Italian architect with whom Hawksmoor most obviously invites comparison.’ 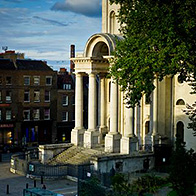 ‘A huge, heavy galleon of white Portland stone anchored among the red-brick Queen Anne houses of the weavers.’

Portico from the south west.
photograph by SRB Humphreys