Thank you to our Supporters

Christ Church was restored 1976–2004 with the generous support of Simon Sainsbury, The Heritage Lottery Fund, English Heritage and also by charitable trusts, businesses and thousands of individuals from around the world.

The recognition of Christ Church’s national and international importance was reflected in the scale of the grant from the Heritage Lottery Fund (£5.9 million) – the largest Lottery grant to a parish church. The initial Heritage Lottery Fund award in 1996 followed the largest ever grant (£435,000) from English Heritage under their own Church Grant scheme. Major support also came from the Monument Trust, and other Sainsbury Family Charitable Trusts.

The 1735 Richard Bridge organ was restored 2012–2016. Thanks to the generous support of our many donors, the sound of the organ, unplayed since the 1950s, can once again resound around Nicholas Hawksmoor’s marvellous interior of Christ Church.

The Trustees are profoundly grateful for this generosity and support, without which the restoration of both Christ Church and the Richard Bridge organ would not have been possible.

Supporters, individuals, companies and grant giving charities, have been acknowledged in the many editions of the Friends’ newsletter Columns which published its 42nd and final edition in 2018. The full archive of Columns can be found on this website.

The Friends launched an appeal in 2002 to raise funds for the new stone floor at Christ Church. Contributors to the appeal were able to make a personal dedication and this was recorded in a specially commissioned book. The book has been beautifully designed and lettered by the late Nancy Winters, Fellow of the Society of Scribes & Illuminators.

The book is kept with the Friends' archive in the Bishopsgate Institute and can be viewed there by appointment.

The Friends ran an appeal between 2002 and 2007 to raise funds to buy new chairs for Christ Church. 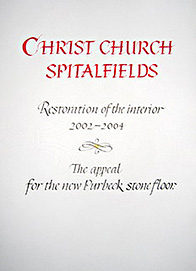