The Friends of Christ Church Spitalfields was established in 1976 to fund and manage the complete restoration, interior and exterior, of Nicholas Hawksmoor’s Grade 1 listed Christ Church (1714-29), which was saved from near-dereliction and which finally re-opened in 2004.

The restoration of Christ Church was a £10million project carried out in phases. The Friends obtained generous grants from the Heritage Lottery Fund, English Heritage, the Monument Trust, the World Monuments Fund and are supported by many individuals from around the world.

The major phase of the project 2002–04 was highly acclaimed and was completed on time and on budget. The restoration received seven major awards including a Civic Trust Award and the Royal Institute of British Architects’ Conservation Award. The Friends have recently raised the funds and managed the complete restoration of the Richard Bridge organ built for and installed in Christ Church in 1735. The opening recital was given in June 2015 by John Scott LVO. John Scott who sadly died later that year, was Patron of the Friends and organist at Saint Thomas Church, Fifth Avenue and formerly of St Paul's Cathedral.

The funds raised at the organ's opening recital enabled the Friends to establish a Travel Bursary for organ builders to encourage excellence and research in organ building. The grant is intended to support a period of workshop training or academic research related to any practical aspect of organ building and covers travel costs, subsistence and fees.

The latest phase of the Friends' work to protect the churchyard goes back to 2010/11 when, in spite of hundreds of objections, including from Christ Church's Inspecting Architect, the London Borough of Tower Hamlets granted planning permission for a new building in the consecrated churchyard immediately to the south of the church, in the middle of statutory public open space. Consequently, in 2012 the trustees and others established Spitalfields Open Space, 'SOS', as an umbrella organisation to act to protect the churchyard from the proposed development.

The Friends' Trustees have continued to strive for a negotiated resolution but, after meeting only with continuing refusal, supported the application for a Restoration Order and opposed the Building Parties' fresh application for a Confirmatory Faculty in the London Consistory Court. The matters were heard in court over ten days during June and July 2016 and further in 2017. Judgment was served on 22 November 2017. Permission to appeal was granted in June 2018.

Eric Elstob
For many years, first as Treasurer from its start in 1976, Chairman from 1996 and President from 2002 until his death in 2003, the Friends was fortunate to have the driving energy, enthusiasm and financial acumen of Eric Elstob. His plaque can be seen in the north west staircase. An appreciation can be read in Columns 21. 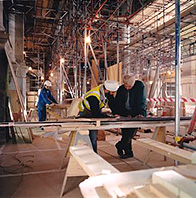 Carpenters consult the detailed plans for the refitting of the south gallery wainscotting and fronts, February 2004.
photograph by SRB Humphreys