The restoration of Christ Church

The comprehensive restoration of the interior and exterior was conducted in several phases from 1976–2004. For more information download The restoration of Christ Church.

Phase 1: 1957–1975
During this period the near-derelict building was saved from demolition by the Hawksmoor Committee and in 1966 the roof was rebuilt, funded by the Church of England. In 1965 the Crypt was used to house a rehabilitation centre for homeless alcoholic men.

Phase 2: 1976–1995
The Friends of Christ Church was established as a charity in 1976 to save the church and bring it back into use. Funds were raised to carry out essential work including stabilisation and strengthening of the structure, roof, stonework and window repairs and restoration, and upgrades to electrical and drainage systems. In 1983 the Crypt was excavated then reinstated; Parish worship returned to the church in 1987. During this period extensive research was made, including into the original arrangement of the galleries, and a number of important reports were written which were used to inform the restoration plans and support the funding bids.

Phase 3: 1996–2001
In 1996 grants of £2.4 million from the Heritage Lottery Fund, £500,000 from the Monument Trust and £435,000 from English Heritage were awarded. The tower and façades were repaired and cleaned; the nave parapets and the south steps rebuilt. The Richard Bridge organ was dismantled and stored for safekeeping.

Phase 4: 2002–2004
In 2002 a further £3.5 million was awarded from the HLF and the contract for the interior restoration was let. The restoration has renewed the fabric of the church, removed the nineteenth- and twentieth-century alterations, re-instated the original arrangement of galleries and recaptured the proportions, light and clarity of Hawksmoor’s original design. The contract work was completed in the summer of 2004. A number of prestigious awards were made for the restoration - see Awards.

The stone commemorating the restoration, dedicated by the Bishop of London, The Rt Revd Richard Chartres, was installed in the portico in 2011.

For more information please download The restoration of Christ Church. 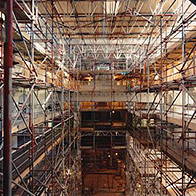 ‘No one has ever explained the inspiration behind [Hawksmoor’s Churches], and they remain unique in European architecture.’

Scaffold in the nave looking east.
photograph by SRB Humphreys