‘By 1700 [Hawksmoor] had emerged as a major architectural personality in his own right. In the course of the next twenty years he was to prove himself to be one of the great masters of the English baroque, more assured in his command of the classical vocabulary than the untrained Vanbrugh, more imaginative in his vision than the intellectual Wren. No one understood better than Hawksmoor the dynamic deployment of architectural form or the dramatic possibilities of light and shade. The complex forms of the London churches, whether in internal planning or in external embellishment, are as eloquent as anything by Borromini, the Italian architect with whom Hawksmoor most obviously invites comparison.’
Colvin, Biographical Dictionary

Nicholas Hawksmoor was born at East Drayton, Nottinghamshire, probably in 1661 (or, according to some authorities, 1666). We know little of his early life or education but at the age of eighteen he was employed as clerk to Christopher Wren, then Surveyor of the King’s Works. During the 1680s and ’90s Hawksmoor learned the various aspects of a surveyor’s craft, and became responsible in his own right for some of the jobs within the Office of Works, including the Writing School at Christ’s Hospital, London of 1692–95 (demolished 1902), and a project for the rebuilding after fire damage in 1694 of the gothic church of St. Mary’s, Warwick. From 1689 he was Clerk of Works for the re-building of Kensington Palace and in the 1690s took up the design, probably started by Wren, of the house at Easton Neston. At Greenwich Hospital from 1705 to 1729 he was Assistant Surveyor, then until 1733 Clerk of Works and almost certainly responsible for the design of the King William Block with its giant columns and pilasters spanning four floors.

Castle Howard, Blenheim, Oxford and Cambridge
In about 1700 Sir John Vanbrugh (1664–1726), former soldier and playwright turned architect, recommended to his client the Earl of Carlisle the appointment of Hawksmoor as draughtsman and project manager in the building of Castle Howard. Parts of its design are now attributed to both men, but many of the garden ornaments and, among his last works, the great Mausoleum, to Hawksmoor alone. The professional association between the two men lasted the rest of their lives; they worked together at Blenheim Palace where Hawksmoor continued the work after Vanbrugh resigned in 1716. In the 1710s, Hawksmoor became associated with work for the Universities of both Oxford and Cambridge, and as well as designs for individual buildings he made proposals for re-planning quite large parts of the centres of both cities. Very little came of these, and at Oxford Gibbs eventually came to design the rotunda for the Radcliffe Library that Hawksmoor had proposed, but he was able to complete the Clarendon building for the Press, and his involvement with the redevelopment of All Souls came to fruition much later, in the 1730s. In Cambridge too, Hawksmoor’s grand design for the Fellows’ Building at King’s College was superseded by that of Gibbs.

The Commission for New Churches
An Act of Parliament of 1711 required the building of fifty new churches to serve the new populations on the fringes of London. The Act established a Commission that was to determine the brief for the new buildings; its members included Wren, Vanbrugh and Archer, and it appointed Hawksmoor and Dickinson as Surveyors to carry out the programme. In 1710 the roof of St Alfege, Greenwich had collapsed and its parishioners petitioned the Commission to provide money for rebuilding the church which then became the first of the series that Hawksmoor designed. Of the intended fifty churches, when the programme expired in 1731 only twelve had been built, of which the six that Hawksmoor designed now provide an excellent compendium of his architectural ideas and vision.

Final years
In the final fifteen years of his life Hawksmoor was responsible for the rebuilding of All Souls College, Oxford where he developed his own version of a gothic style; completing work at Blenheim and, succeeding Wren as Surveyor to Westminster Abbey, re-casing its west towers. At Castle Howard he designed the Mausoleum, begun in 1729 but only completed after his death in 1736, that Kerry Downes describes as ‘one of the last Baroque buildings in the freedom of its sources and the intensity of its direct attack on the emotions; its language is the one [Hawksmoor] knew best…the eloquence of stone’. 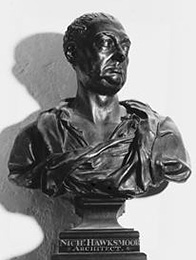