In recent years it has been possible to examine the instrument in much greater detail. Several teams of experts have conducted important research and have surveyed the interior. A more complete inventory of the contents of the organ became possible when it was dismantled by the organ builder William Drake and his colleagues in 1998. It then became clear that, despite significant alterations during the course of the nineteenth century, much of the eighteenth century instrument survived.

The restoration has returned to Bridge’s original scheme of 1735 by repairing the pipes and mechanisms that survived, and replicating those that had been lost. The layout, keyboard compasses, stop-list, actions and winding (all of which could be established with confidence) are Bridge’s, and the casework has been restored to its original appearance and finish.

The approach to the restoration was dictated by the organ itself.

Bridge’s pipes were designed to ‘speak’ in a certain way, and his mechanisms to work in a particular way. This required a scrupulous and considered restoration embodying best contemporary conservation practice.

The case is an important piece of eighteenth century furniture and its conservation was a significant project in its own right. It is made of mahogany and the exuberantly carved double serpentine front is one of only eight ever made to that pattern and by far the largest. This is a rare form of case and one that is distinctly English from the second quarter of the eighteenth century. Its restoration completes the west end of the nave.

Remarkably, there had been only two major alterations to the case in its long history: the console, which was cut away on both sides in order to insert a Victorian keyboard; and alterations to the high level ‘shoulders’ to mask the insertion of the Swell in 1852. Both these alterations have been restored to the original 1735 scheme.

The case was in a very poor condition. The carving and woodwork had been neglected for 150 years and a number of sections were badly broken.

Before the organ's restoration the case stood empty, the pipe work, stops and pedals having been removed in 1998 for safe storage at the start of Christ Church’s lengthy restoration.

The Friends commissioned a report from historic paints expert Catherine Hassall on the surface finishes to the case to establish the original decorative scheme of 1735. Determining the date of each section of the woodwork has also helped establish the original arrangement. The report also confirmed that the shoulders at high level were installed in the 1850s, probably to hide from view the new Victorian Swell box. In order to restore the instrument to its 1735 state it follows that the case should also be returned to that date, and the shoulders have been removed (and preserved) along with the Swell.

Few English organs had pedals before 1800. From that date the absence of pedals poses increasing constraints on repertoire, and it affects earlier repertoire from other schools of composition that did have pedals (e.g. Germany). The Spitalfields organ first acquired pedals around 1811. More extensive provision was made in 1837, and again in 1852.

In order to increase the instrument’s musical versatility and to equip it to perform much of the eighteenth and early nineteenth century European organ repertoire, a Pedal Organ is to be constructed using H C Lincoln’s surviving Double Pedal Pipes and the former Great Open Diapason of Gray & Davison. A reed of 16' pitch is also to be included, possibly using the pipes of the Gray & Davison Posaune.

The pedal board is to be flat with parallel keys and will be constructed so as to be removable. Two manual to pedal couplers (Great to Pedals, Choir to Pedals) will be provided.

Eighteenth century Swells were treble divisions, consisting largely of solo registers and echoes; they had only a modest role in the repertoire, and this is the background to Bridge’s Swell. By the mid-nineteenth century the Swell keyboard was often full compass and its musical resources had been greatly expanded. Organists today make extensive use of the Swell and the lack of a ‘modern’ Swell will undoubtedly be felt in certain repertoire. However, whereas the introduction of pedals could be justified as an addition to the Bridge scheme, the extension of the Swell compass and necessary enlargement of the Swell box would be a modification to Bridge’s scheme, meaning that the organ could not be heard quite as he intended. The Friends have been advised, and have decided together with the PCC, to reinstate the 1735 scheme.

Pitch is an important consideration when re-establishing the sound of the altered pipes, since a variation of pitch in a voiced pipe by as little as one quarter of a semitone will influence the harmonic structure of the pipe. The original voicing, pitch and compasses will be retained and an appropriate temperament used.

First the magnificent mahogany case and intricate carving will be repaired and restored. The mitres and crowns will be returned to their positions at the top of the three towers.

The pipes will be restored in the workshop and then, pipe by pipe, they will be brought back to Christ Church to be reinstalled in their original position.

The organ is being restored by William Drake Ltd of Buckfastleigh. The company, founded by the late William Drake, has an impressive portfolio of historic organ restorations, including Lulworth Castle Chapel, Dorset (1780-5) St Paul, Deptford (c.1745), St Anne, Limehouse (1851), the Ball Room organ in Buckingham Palace (1818,1855) and, most recently, the Sutton organ (1849) for Jesus College Cambridge. 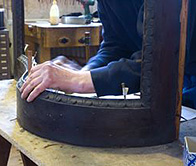 ‘The Bridge organ is exceptional… I believe that this instrument would be unique… [and] would be suitable to perform, study and teach music from the era of Blow and Croft to that of Samuel Wesley.’

Case repair: in the workshop at Buckfastleigh a craftsman works on a section of the case. Note that all the original nails are carefully recorded and labelled.
photograph by SRB Humphreys