The history of the organ

Only four large organs could be found in English churches in the eighteenth century. Those at St. Paul's Cathedral, Salisbury Cathedral and St. Mary Redcliffe, Bristol have long since disappeared – only the organ at Christ Church remains, and almost the only instrument that bears witness to the vibrant and rich musical life of Georgian London.

Bridge's organ, with three rows of keys and over two thousand pipes, was erected on the west gallery of the church in a case of solid mahogany. The double serpentine front, exuberantly carved in the richest taste, is one of only eight ever made to that pattern and of those is by far the largest. The gilded front pipes include the low notes down to contra G, five notes lower than found on organs built today.

Most of the structure of Bridge’s instrument survived the nineteenth century without radical alteration, and although there were some losses towards the end of the century, and further modifications in the 1920s, much of the original pipework, soundboards, action parts, elements of the wind system and the magnificent case, are extant. Sufficient evidence is being gleaned from the careful study of what survives to enable us to reconstruct the missing parts with confidence.

By the 1950s, the organ had been neglected so badly that it was unplayable. The future of the church was also uncertain and at one point threatened with demolition. This led to the campaign to save the building, and over the course of many years, The Friends of Christ Church Spitalfields raised the considerable sums of money needed to achieve this.

1837
After a fire in the steeple in 1836, H C Lincoln was brought in the following year to make repairs necessitated by extensive water damage.

1998
Organ dismantled by William Drake and stored for safekeeping during the church restoration.

2012-2015
The restoration of the 1735 Richard Bridge organ, built for Christ Church and a rare eighteenth-century instrument of historical significance, was completed by William Drake Ltd.

2016
Additional work: installation, by William Drake Ltd, of the Quintadena stop in the Choir organ. 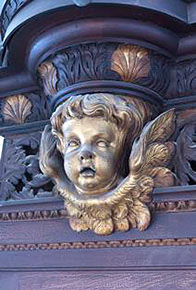 ‘The presence of an instrument of this quality and importance will more or less of itself guarantee that Christ Church is able to appoint successive organists of exceptional calibre. Moreover, the church would inevitably become a centre for scholarship, learning, and concert use which would attract a large and varied public into this area of London.’

James O’Donnell, Organist and Master of the Choristers, Westminster Abbey